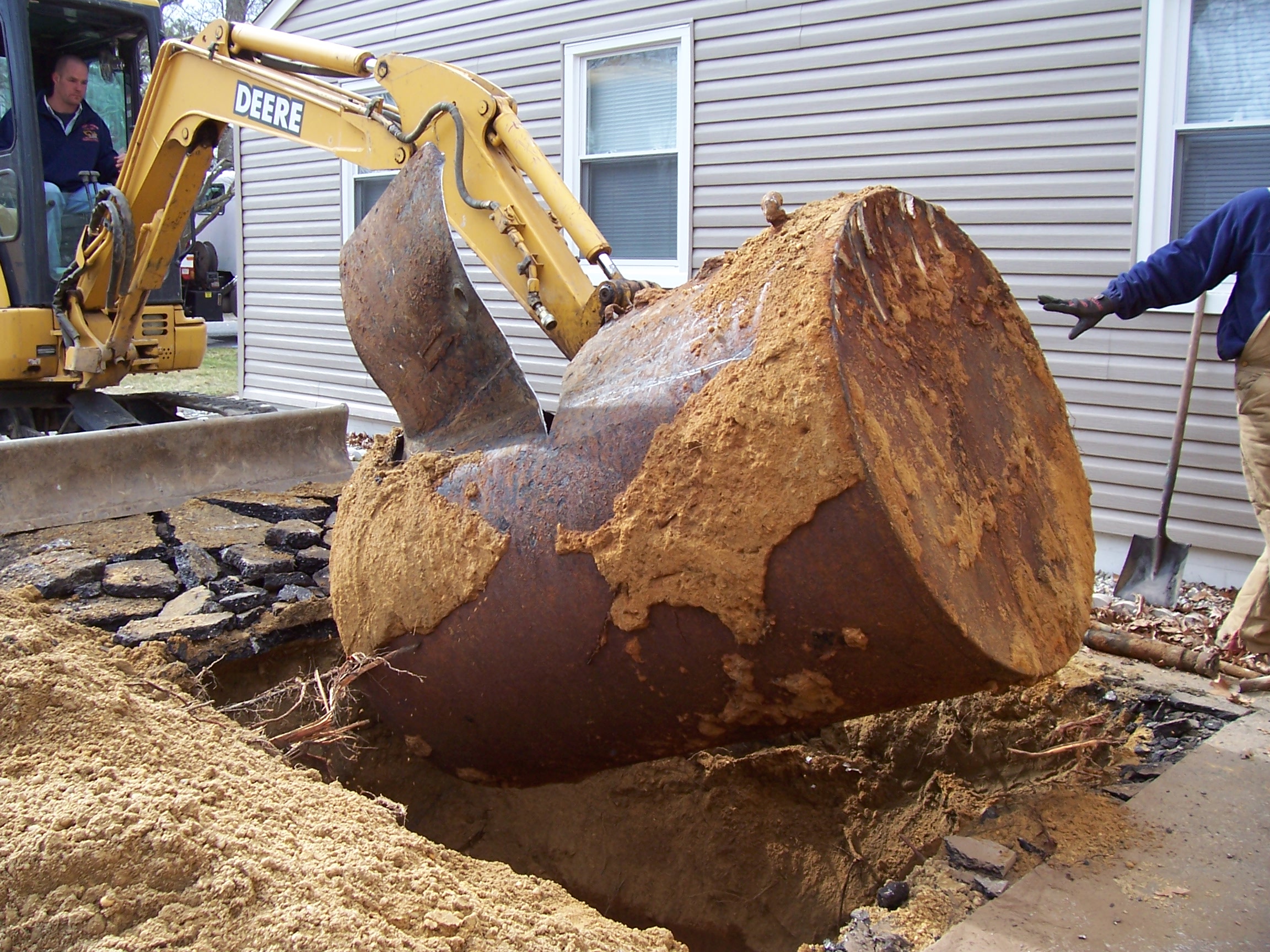 What is an underground storage tank?

An underground storage tank (UST) is a large container built to hold large quantities of liquid or gas underground.

Commonly used on residential and commercial properties between the 1930s and late 1980s, tanks were typically constructed of bare steel and were used to contain oil for heating or fuel. 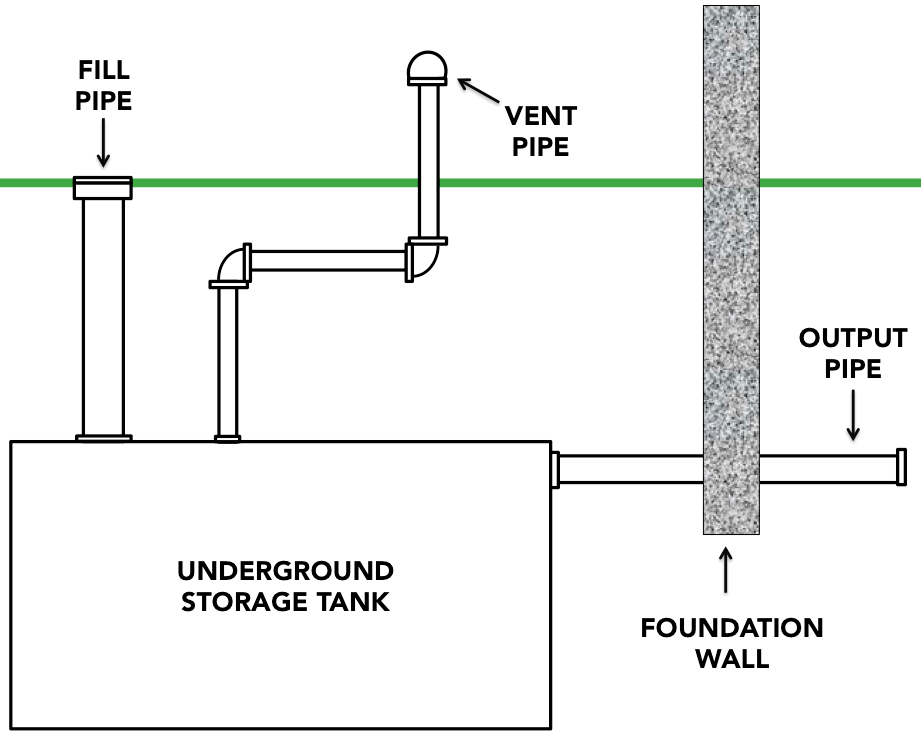 How long have underground storage tanks been used?

Underground tanks have been used since the 1930s and are still used today, but they've changed a great deal since the beginning.

1930s — After urbanization and industrialization, underground storage tanks become the preferred storage method (over the previously preferred aboveground storage tanks). This was due to aesthetic purposes, the additional real estate space it left business and homeowners, and an increase in public safety.

1960s — Tank owners grow more and more frustrated with inventory loss due to tank corrosion. Due to their concerns, there is a push to find a solution to the problem, and three are realized: keep replacing the tanks when corrosion happens, close the tank down, or upgrade to new and improved technologies.

1970s — Concerns begin to spread regarding the environmental impact of oil tank leaks, especially in regards to USTs. The idea of secondary containment, in which steel tanks are built with two walls instead of one, is introduced and takes hold.

1988 — The EPA sets a deadline for upgrading underground tank systems in the United States to put new tank regulations into place.

1990s — Many are choosing to close and remove their tanks due to the now-known environmental and health risks.

Why are oil tanks a concern?

USTs are a major environmental danger and health risk due to their high potential for leaks, and have been labeled a 'suburban time bomb.'

Oil spills from UST leaks are the single greatest threat to groundwater quality in the U.S. today.

In the United States alone, roughly 200,000 sites have been contaminated by UST petroleum leaks

Leaks may seem small and insignificant at the time, but they can pose an extreme threat to the environment and the public’s health.

What causes tanks to leak?

The most common reason for tank leaks is the material the tank is made of. Before 1988, a majority of tanks were made of bare steel. When buried in the soil unprotected, that steel can corrode over time, which causes leaks to happen.

An estimated 1.2 million underground storage tanks nationwide are a concern.

However, there's more than just a little rust to worry about when it comes to your tank.

Other common causes for tank leaks:

How can I tell if my tank is leaking?

Due to the fact that they're buried underground, it can sometimes take years for homeowners to realize their UST leaked.

A leaking tank can be a major hazard to your health and the environment, so it's important to be able to recognize the signs, such as:

If you see any of these signs, it's time to call an underground tank testing company right away.

Keep reading: Be on the Lookout for These 5 Oil Tank Disaster Signs

I discovered an oil tank on my property, should I have it removed?

Regardless of the situation, any oil tank has potential for risks and it’s wise to just get it out of the ground if it’s not serving a purpose.

Not to mention—if you want to sell your home down the line, underground oil tanks are arguably #1 on the list of “Biggest Potential Buyer Turn-offs” because whoever buys the home takes on liability.

Who should I hire to remove my UST?

Dealing with an old or obsolete underground storage tank is serious business and should be properly handled and removed by a UST professional.

Do your research here, and call multiple companies for more than one quote and opinion.

Hometown Demolition Contractors can help you find UST removal experts. Simply search by location and find contractors listing ‘oil tank removal’ as one of their services. From there, you can learn more about them, read verified customer reviews, and get their contact information.

Regulations for oil storage tanks vary from one place to the next, and there are levels within the hierarchy that need to be considered, including federal, state, county, and municipality.

Get to know your state's laws when it comes to oil tank removal because they vary from one to the next.

Depending on your location, state regulations may require your oil tank be removed if it is no longer in use.

Take a look at these few examples to see what some states require:

Even if your state doesn’t have UST requirements, your local government might. So educate yourself by doing some research on your county and municipality laws or contacting a local tank removal specialist to fill you in.

Is UST removal covered by insurance?

A majority of insurance companies do not offer insurance coverage for inactive USTs or the removal of such.

And even if your UST is active and you have insurance, if it leaks, most policies have a “pollution exclusion” clause that leaves you responsible for paying every last cent.

How does oil tank removal work?

Tank must be closed.

Before the tank can be removed, it needs to be taken out of service and properly 'closed.'

This involves emptying the tank and pipes of any heating oil and thoroughly cleaning it in order to eliminate any residual oil and vapors. If there's no sign that the tank leaked, it is then considered closed and ready to be removed.

If you recently discovered a UST on your property, chances are that it was already closed; but that’s not always the case, and your contractor can help you determine that.

Tank can be removed.

Once the tank is cleaned and closed, it’s dug up out of the ground, lifted onto a trailer, and hauled away to be properly disposed of and reused/recycled when possible.

How much does oil tank removal cost?

If your tank is leaking, the cost of removal and clean-up could reach as high as $30,000 in some cases.

As you can expect, the cost to remove an oil tank depends on a number of factors, like the size of the tank, whether or not it's leaking or is considered 'closed," the location of the tank, and more.

7 Things You Should Know Before Starting a DIY Demo Project

Update Your Home’s Exterior This Spring (and Raise Its Value)

The Best Ways to Save Money on a Home Renovation Project