Demo Dogs, LLC offers a wide range of demolition services to Mandeville, Louisiana. We offer house demolition, debris hauling, and a variety of landscaping and renovation services. Our crew is comprised of retired Marines with more than 10 years of industry experience. We are good at what we do, and we genuinely love our work.

Our team has provided years of diligent, efficient, and courteous services at a fair price. Our goal is to exceed customers’

Demo Dogs, LLC offers a wide range of demolition services to Mandeville, Louisiana. We offer house demolition, debris hauling, and a variety of landscaping and renovation services. Our crew is comprised of retired Marines with more than 10 years of industry experience. We are good at what we do, and we genuinely love our work.

Our team has provided years of diligent, efficient, and courteous services at a fair price. Our goal is to exceed customers’ expectations, and we work tirelessly to do that. Contact us today to learn more about what we can do for you!

Ask about our military discounts!

Jason and his team are amazing. I requested multiple bids from demo companies around the area, and the combination of price, professionalism, and openness sealed the deal for me. I was in contract for a piece of land with an old house that needed to be torn down. The escrow date kept slipping, but Jason continued to check in and was ready to start work the day after we closed. We added in a couple other projects while he was there, and he was more than willing to take them on and priced them fairly as well. I hope I don t require demo work in the future, but if I do, I will be calling these guys to do the work.

I was on the search for a doublewide trailer demolition quick and fast due to my time frame. I searched up and down in the surrounding area, and Demo Dogs LLC was by far the most reasonable price. They called me that same day to quote the project at hand and scheduled a next-day meeting for further analysis. Within one day, Demo Dogs was working on the project. They showed up on time and were fast. Overall, it was a great experience. I would highly recommend them to anyone looking for their service.

I had a historic home that needed to be torn down and had to jump through hoops to get it done. Demo Dogs LLC helped me with the final steps, which involved working around a large live oak. Demo Dogs did everything I needed to get the final authorization to tear down the home. When I started this project, I had many problems from the neighbors. They don t like change and they fought me every step of the way at the city council. I was having difficulties with the neighbor who was out filming and ready to complain and shut the job down if she could. Demo Dogs did such a great job that she actually wrote a letter to the city praising them and the work they did. The job was executed perfectly and the price was great. I highly recommend them.

I wanted a shed gone, so I called up a bunch of people. A young man came from Demo Dogs, and he was very presentable, so I gave him the job. They knew exactly what I wanted and delivered. Excellent work!

Within minutes of requesting a quote for our inground pool removal, I received a text from Demo Dogs with an attached quote for the project. Jason (owner) came to my house on a Sunday to discuss the project. We set up a day and time to begin. Jason and his crew were on time and professional. They moved the fill to the hole in the backyard, working around our established gardens. They used a compactor as they went, and when the hole was filled, they cleaned the sand off of our patio and filled the track marks in our lawn with sand. They also cleaned the street where the sand was delivered. The number of loads of sand needed was less than originally quoted, so the project was under the quoted price. It was an overall great experience and we would highly recommend this company.

5.0
Review by Donna A. in Mandeville, LA

I needed to have a mobile home demolished and some additional things done to get our site ready for a new home. Demo Dogs demolished the trailer, cut trees, and grinded stumps. I received three bids, and Demo Dogs was by far the most reasonable. My nephew saw them on one of his job sites and said they did a great job, so I went with them hoping the price difference wouldn t come back to haunt me. But I have to say, they did an amazing job! Jason was very professional and kind. They were quick and efficient and left the site very clean. I couldn t be more pleased! I highly recommend Demo Dogs and will be calling on them to do other projects in the near future.

I had a large driveway removed and hauled off as a last-minute job request. Jason at Demi Dogs was awesome. He took my call after hours, squeezed me in on a Friday, and did a fantastic job. It was great to deal with a professional and personal group. I will be referring friends.

I needed a quick and easy contractor to demolish a burned down building. Demo Dogs certainly knew what they were doing, as I never had any issues working with them. Everything went smoothly and I highly recommend them.

We needed to have an old koi pond removed, including liners and bricks, and have the new fill sand thoroughly compacted as the foundation for an addition would be built on top of it. Jason of Demo Dogs replied quickly to my request. He explained my options, and it was clear he knew his stuff. He provided a competitive estimate and did the work two days later. The yard was left very flat and well-compacted. The sand and debris were cleaned up, and Jason was quite pleasant to deal with, too. My experience overall was excellent!

I just bought a home and needed the pool demolished. I hired Demo Dogs for this job and everything turned out well. They came in and promptly did their job. The site was cleared out and filled in perfectly. I had no problems whatsoever with their service. I got what I paid for so I am happy with their service.

Our old wooden vault garage was in decaying condition and needed either repair, conversion, or demolition. At the estimate, we discussed the various ideas and decided on demolition. Jason Collier of Demo Dogs communicated well with me and quickly. After recommending an electrician to disconnect power lines, the garage demolition project was arranged within a week and completed in one day, when the estimate was for 1-2 days. We were surprised how well everything went, and with no surprises. The debris was cleaned away from the backyard, and the dumpster out front was removed that afternoon. We appreciate also the reasonable price considering how much work went into the project.

I had a 10x15 shed from the 70s that needed to be torn down as well as a concrete slab installed. Jason came out the day after I contacted him to provide me a quote. He worked within my schedule for both projects. He demolished the shed and laid the concrete in two days, taking care not to tear up my yard or disrupt my property.

We had 3 estimates done on demolishing our inground pool. Not only was Demo Dogs the least expensive, but Jason said that he would not have to tear up my front yard with heavy machinery or disturb my gate and fence to get to my back yard. He and his crew did exactly what he said they would do. Finally a contractor who kept their word! They cleaned up each day on the job site, were on time, and completed the job when he said they would. We couldn’t be more pleased. We would recommend Demo Dogs for any demolition project.

5.0
Review by Stephanie B. in Mandeville, LA

Jason was prompt and professional. He was extremely knowledgeable and explained exactly what was going to be done. He and his crew were meticulous and the completed project looks amazing. Demo Dogs went above and beyond, and I will definitely use them again. I recommend Demo Dogs to anyone tackling a demolition project.

I needed a 20 ft by 15 ft concrete slab demolished. I hired Demo Dogs for this concrete removal project and they did a perfect job. Everything was done on time and they were very professional all through out the job. Out of the three contractors I inquired with they were the least expensive, yet I still received great service from them.

My damaged garage needed to be torn down and the debris hauled away. Demo Dogs were just great with the project. The man I spoke with came more than once before he gave us an estimate. He was great with scheduling and made sure the job was done on time. He was constantly in and out of the site just to make sure everything was going well with his coworkers. After the demo they left a clean job site, which was wonderful. I wish all contractors worked like they did!

I needed to remove a concrete slab that was 40 ft. x 9 ft. Demo Dogs LLC replied immediately and came out the next day. They gave me a fair quote and came out the next week, completing the job in just a few hours. They did a great job and are good people. They offered a fair price, too. It s hard to do any better than that. We will use them again for any similar work. 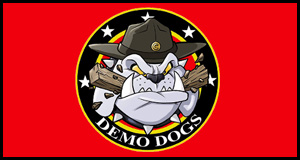