Arbor Transport & Construction is a locally owned demolition company serving the state of Oklahoma. Founded in 2008, we provide reliable demolition services to residential and commercial customers.

Arbor is a team of professionals that makes your satisfaction our first priority.  Contact us today for a free estimate.

We had an inground pool we were looking to remove, so after doing some research and comparisons, Arbor was definitely the best company for us in terms of pricing and overall positive feedback when it comes to their service. They completed the removal on time and were just absolute professionals throughout the job.

I was looking for a contractor to demolish our pool, so I called around and found Arbor Transport & Construction on Hometown Demolition. After talking with Kenny, the owner, and getting an initial quote, he promptly came out and looked at the pool. From there, I immediately knew that he was knowledgeable about the job and also found out that he was from Norman and that coincidentally, my brother had also used him and was quite satisfied with his service. That sealed the deal for me to use his company, and Kenny absolutely delivered with excellent service! I was so satisfied with the work Kenny did that I even recommended him to my other friends who were also looking to get some work done.

I needed my barn demolished and called Arbor Transport & Construction. They were just great. Everything was done according to my request, and he got it done ahead of schedule. When he came, he did the demolition promptly. It was great service for a reasonable cost. I am very happy with their service and have nothing but praise for this contractor.

Kennie and his crew showed up at 10:00. They removed my 10x20 shed and everything in it, including a refrigerator, old furniture, and a table saw. They did a great job cleaning up afterwards and were done by 2:00. I would definitely use them again!

I needed a 50+ year old in-ground cement pool removed. Arbor Transport & Construction did a fantastic job with my pool removal. Arbor was easy to contact, immediate with meeting me at the site, emailed with an estimate the following day, and completed the job in two days. They guaranteed to take care of any ground settlement issues for one year. I can’t recommend their services enough. In fact, I plan on calling Arbor for a second project!

Arbor Transport and Construction did a good job with my pool removal. They removed all traces of the pool and filled in the hole with no problems. They were conscientious and friendly. They also promised to take care of any settlement problems for one year after. Their overall service was very impressive. I wouldn t hesitate to use them again.

We needed to have a house completely demolished, and Arbor Transport handled it for us. They were great, as expected, and we were very happy with what they did. They were actually really good.

I had a 14 ft x 58 ft singlewide mobile home on a slab demolished. Arbor Transport & Construction was great. I had absolutely no issues with these guys. They did an outstanding job and had everything taken care of and removed. In fact, they even did more than I asked them to.

We hired Arbor to remove a vinyl-lined swimming pool with a concrete platform. They did a pretty good job in getting it completed. I had no complaints at all. They got it all taken care of.

We needed to demolish a 24000 sq ft building and 7000 sq ft concrete pavements. Five stars for Arbor Transport for doing a great job!

I had a small in-ground pool that I needed removed, and we chose Arbor Transport to make it happen. I have no complaints! They did a fabulous job. In fact, I was out of town and we did everything over the phone, but still this project ended up very satisfactory.

I needed to remove a vinyl-lined pool and have it filled in with dirt. The crew at Arbor Transport did a great job completing the project! I would recommend them. I did not have issues working with them.

I needed a single wide trailer demolished. There wasn t a slab underneath it. The contractor did an amazing job.

We had a 14 x 30 ft. inground vinyl-lined pool partially demolished. The contractor buried the debris and returned the site to grade. They were great -- very fast and efficient.

We had our 30-year-old inground pool demolished and filled in. We chose Arbor Transport & Construction and they did a really good job. They got it completed in 1 day and so far we re very happy with it. They were very professional, nice and honest people.

We needed to do some interior renovation at our church, which included some demo work for taking down walls and other stuff. We were satisfied with Arbor Transport & Construction s work. They did a really good job. They were professional and fully explained what they were going to do before swinging the first hammer.

I needed to fill in my 17,000 gallon pool and hot tub. I was very satisfied with Arbor Transport & Construction. They collapsed the pool in on itself to complete project. They did a great a job at a good price.

We had our 24 ft. above-ground pool removed. Arbor Transport & Construction Inc did a great job. They were in and out within just a couple of hours. We were just amazed by how they work, they were very professional and we felt comfortable having them there.

Our house had burned down in a fire and needed to be completely demolished. Arbor Transport & Construction Inc did a good job taking it down. They were professional as far as I can tell. I wasn t there all the time but when I was there, they were doing what they should be doing. They answered all my questions and explained what they were going to do.

We needed our inground granite pool removed and filled in. It s about 30 x 80 ft in size. Arbor Transport & Construction Inc did the project, and I thought they did a great job as far as the pool getting removed. The one issue we had was with an electric line accidentally getting covered up and we discovered it when our heater wouldn t turn on. We had to go out and dig it up to find it, my husband reconnected it. Not sure if demo companies are particularly always careful about those.

My single wide trailer, attached 20 by 20 ft building and 8 by 8 ft storage shed was demolished, and we had the site brought back to grade. Overall, I was very satisfied with Arbor Transport & Construction. It took a little bit longer than I expected but the guys that I dealt with were great. They did a good job and the price was right. They cleaned up after they were all done and everything was hauled off. The work met all of my expectations. 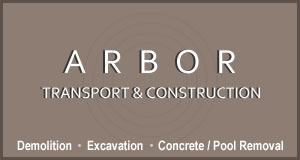