Debuck Construction has over two decades of experience serving Detroit and much of southeastern Michigan. We are experts in residential and commercial demolition, ranging from pool removal to full structural tear downs.

We strive to provide reliable, high quality demolition service on every job.   Whether you need to remove a concrete driveway, tear down an old home, or remove a swimming pool, we'll complete the job affordably and efficiently.  Give us a call today to schedule

Debuck Construction has over two decades of experience serving Detroit and much of southeastern Michigan. We are experts in residential and commercial demolition, ranging from pool removal to full structural tear downs.

We strive to provide reliable, high quality demolition service on every job.   Whether you need to remove a concrete driveway, tear down an old home, or remove a swimming pool, we'll complete the job affordably and efficiently.  Give us a call today to schedule your free estimate.

I needed a concrete slab by a patio door removed. I got in contact with Debuck Construction, and I m never using them again. They did not communicate well and were extremely difficult to work with. I would not recommend their services.

We were very satisfied with Debuck Construction s service and how they removed our inground pool. They came in and were very quick to complete the job with little to no hassle. They also gave the best price!

When we needed to remove the vinyl lined steel wall and cement walkway that was around our pool, we hired Debuck Construction. They did an excellent job, and we didn t have any issues at all. If the highest rating is 5, I would give them a 10!

I used Debuck Construction for my chimney removal, and even though they had to re-schedule a couple of times, I was still very satisfied with the service they provided. They came on time on the agreed date and cleaned up after they were done.

I needed to demolish a fire-damaged house with a basement that was built in 1900. I went with Debuck Construction for the project, and I would say they did a great job. I would give them 5 stars.

Debuck Construction did a great job handling my interior demolition project. They were always on time, and they did an excellent job.

I needed a concrete slab removed, and I used Debuck Construction for the job. I was really impressed with their work from start to finish and their ability to keep everything professional. I would definitely use them again.

When I needed my garden shed demolished and removed, I contacted several contractors, but I ended up using Debuck Construction. They did a very good job. They cleaned up the side after the demo was done, and they were on time and fairly priced. I highly recommend them for other demolition projects.

We went with Debuck Construction for the demolition of our inground pool, and I was not very happy with it. Communication was part of the issue, and they damaged both mine and my neighbor s garage siding. I brought up the concern, and said they will take care of it, but It could have been better if they handled it with extra care.

I needed an interior demolition done—taking out windows, doors, kitchen counters, and the bathroom. Debuck Construction did a fine job. They showed up on time and tore down everything. They were efficient and cleaned up all the debris when they were done. Good job!

I have a fiberglass pool that has collapsed below the waterline and have decided to remove it rather than replace the pool. Debuck did a good job. Their quote was a little high but it was worth it. When they accidentally damaged the patio they stood by their work and fixed it. I will definitely use them again in the future.

I had a 16 x 32 ft. inground pool (gunite) with concrete deck and I wanted everything removed. They did exactly what they promised, passed the inspection, and got it done efficiently and as quickly as possible. The service was good, they removed everything and filled it with topsoil. I just had it seeded by a different contractor.

I wanted my granite pool removed and Debuck did the job for me. Everything was fine. The price was reasonable for the service I got.

I had a 1400 sq ft brick house with a partial basement and a 600 sq ft detached garage that needed to be removed. They were very prompt! They came out, gave a quote, did the demo and cleaned up good. Everything was done nicely!

I had a concrete patio measuring around 8x15 ft. demolished by Debuck Construction. They did a great job in getting that done, and everything went well.

I needed to remove a standard-sized pool made of vinyl and have it filled in. I had Debuck do the job and they did great! They hauled away all the debris and were very easy to deal with.

I needed a 3000 sq ft house demolished with a 2000 sq ft basement. I was pleased with the service. They did an asbestos inspection and that came up clear. It was a straightforward project that went well.

I needed a 1400 sq ft house made of cinderblock and wood demolished. There was no basement. I was really happy with Debuck s work. The price was exactly what they quoted. They were great!

We were removing our above ground swimming pool and the wood deck surrounding it. Debuck were great guys to work with.

I needed to get a shed demolished. Debuck did the demo for me. Everything worked out just fine.

I needed my garage demolished but wanted to keep the foundation. Debuck did a great job and exceeded my expectations.

I needed an inground pool removed. It was made of gunite and was a standard size pool. I was satisfied with the service that Debuck provided. They filled in the pool and did an awesome job.

I needed to demolish a 3200 sq ft commercial building. It was a concrete building. Debuck did an awesome job.

I needed to demolish a 700 sq. ft. house made of wood with no basement. There s no need to remove the foundation. The contractors that did the project were efficient and great. I was satisfied with their service.

We needed an in-ground pool removed. Debuck Construction did a good job.

Car garage demolition. The guys from Debuck hauled away all the debris and returned the site to grade. They did a fine job.

Debuck Construction did an excellent job taking down our 1200 sq ft house and leveling the ground. Excellent turnaround time and good value for money.

We had our house demolished, and the site graded. There was a small amount of asbestos found, but another company took care of it. The job that Debuck Construction did was good. One thing I thought they were really good at is on the cleanup. They cleaned up thoroughly everyday they were here. The workers were all respectable; I ll give them the highest rating, but their boss I think probably gets 1 to 2 stars because he would always come out cutting corners on things, like when they were filling in the site with dirt. Instead of putting in just the regular dirt, he added some clay on it. Overall the job was taken care of, so I am good with that.

5.0
Review by Hassan A. in Dearborn Heights, MI

We had a 20 x 40 ft swimming pool that needed to be taken out. We hired Debuck Construction for the job and were very satisfied with the outcome. They deserve a perfect rating.

5.0
Review by Anthony in Detroit, MI

We took over an old factory and needed help in removing all sorts of debris like concrete, metal, old assembly line machinery, and others. We used Debuck Construction for the job. They re a reputable company, very professional and responsive. The same thing can be said about Ray Debuck, the owner of the company, he knows what he is doing and reacts quickly. We have been using them on other projects and consider them as an extension of our company.

Debuck Construction successfully removed a concrete porch and its awning for us. They did the job quickly, responded well and did exactly what they said they would. The only negative thing was that they dented the grass with their equipment. Not really a big deal, and I sort of saw that coming anyway. Overall I would say that it was a great experience with Debuck.

We had an all wood two-story home with a two-car garage torn down by Debuck Construction. They were really nice people and kept me well informed about what was going on. I never had any problems. I would recommend them to anyone needing demolition work.

I used Debuck Construction to take down a wood and brick home with two stories up and two stories below ground. They also demolished a two-car detached garage, hauled everything way, and leveled the site. I was happy with their work and enjoyed the company. Overall, it was a very positive experience.

I needed to have a wood frame two car garage removed. The guys from Debuck Construction were easy to work with and communicated well. Overall customer service was good. There were a few delays because of equipment breakdown on the first day, and they were not able to fix it until the next day, which I think was out of their control. Overall, they did a good job.

We had a 900 sq.ft. wood house that we wanted taken down. The job went to Debuck Construction. Debuck was on top of everything and the project went well overall. The manager or representative they sent out was Ivan, he was very pleasant and easy to work with. 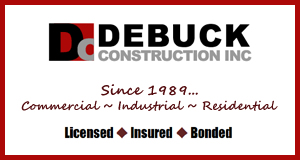